When you find yourself working in a new country - a place to which you have never been before and where you don’t know the language, the culture or the conventions - what is it you most want?

I wanted those around me to be tolerant. Tolerant of my inevitable social blunders, forgiving of my ignorance about their way of life, patient with my inappropriate cultural references and above all, to be accepted. So meet some of my new friends in the United Arab Emirates.

These amazing guys are part of Tahaluf’s senior management team, a fast-growth, high-tech company in Abu Dhabi. In just under two weeks (and in their second language) we managed to circumnavigate the entirety of an ILM Level 5 Certificate in Leadership & Management, introduce the Insights Discovery model and profiling, whilst keeping their very busy company operational. And no wonder I found tolerance. Culturally the good people of Abu Dhabi are extremely accepting of the 200 different nationalities who work in and around their beautiful city. Moreover, His Highness Sheikh Khalifa bin Zayed Al Nahy declared 2019 as the year of tolerance, a year to raise the UAE’s reputation as a global leader for acceptance and coexistence. The simple and worthy aim was to deepen the values of tolerance among the UAE’s population by creating seven Pillars of Tolerance, in the same way we like to expound values in business (though less predictable than the obligatory ‘integrity’ etc). Their Pillars of Tolerance are in education, at the workplace, within culture, in legislation, the media and in projects and initiatives; making a safe environment for different cultures to dwell together in harmony. So I needn’t have worried.

I do hope that we as a society in the UK are not too cynical to similarly embrace such a positive movement. I also hope that wherever radius training takes me next, I can pass on just a little of their culture. Adrian Nash. 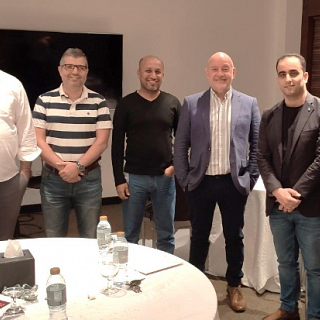